Getting Away From It All To Get Creative

How to make space to dream and create: 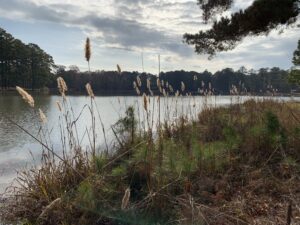 A still lake in the middle of the woods calls my name each fall. Most Thanksgivings, we venture down south to the backwoods of Mississippi where pine trees soar overhead and the soft scent of gardenia lingers on the bushes. The leaves still waft down to the ground, unlike the bare branches back home in the mountains and we get an encore of Fall for a few brief days.

Yet, even though I knew this scene was waiting for me, and how wonderful it would be to be in such a serene place, it still took me some time to settle into it. I could sense a tension in the first few days of the week. My self knew what it wanted to do, but had to unwind a little to settle into the peace of this space.

At first I couldn’t tell a huge difference or even realize how little I had relaxed. You see, we get used to our rhythm of everyday life so much that it can be hard to fully realize just how much we pack into our 24 hours. Most days I don’t even realize that I’m doing more than I probably should, moving faster than I ought, and filling too much of the void.

It wasn’t until the week progressed that I was able to tell the difference. I was sleeping in later, moving slower from task to task, and taking an extra lap around the lake because well…”why not?”

I still had just as many things on my to-do list as earlier in the week. I could have filled the time with more visits with people, errands to run, or things to do. And, while I still don’t sit still very well, I could see that I was sinking into a new pace for the day.

One thing I noticed when I had settled into the pace of this week was the overwhelming amount of ideas that were percolating. I had so many ideas swirling in my head that it felt overwhelming to try to catch them and make sure I could do something with them, even if that only meant recording the idea for later.

I had space in my schedule to go throughout the day with no care of deadlines.

I had space in my mind to think about other, different things.

I had space in my heart to consider what is most important in my life.

The space that was made from laps around the lake, hours in a car, and sheer time, was priceless. You see, in my normal schedule, I’m often paying attention to so many different things that my own hobbies, interests, and ideas can get pushed to the background. But, this week those ideas had room to come bubbling up to the surface.

These ideas for projects, pursuits, and passions gave me a lot of energy. While overwhelming to a doer like me, they also gave me a creative spark that had been dormant for a while. Dreaming is valuable, but dreaming often needs some space: mental, emotional, and even physical. I experienced that this Thanksgiving.

When I come home, it’s often back to the bustle and the constant alerts. So many things vying for my time. So many things I allow to fill the voids. I know it’s a daily fight to build margin in my life. I have to be intent on it. The dreams God has place in my life require some space to be able to bubble up.