When we first got our goats, we had no idea what to do.  It was a learning process to say the least! We didn’t even know that hay feeders were a thing!  However, after a few months of wasted grass hay being strewn everywhere by our sweet little goats, I stumbled across the concept of a goat feeder and it made a ton of sense!

What we started with… 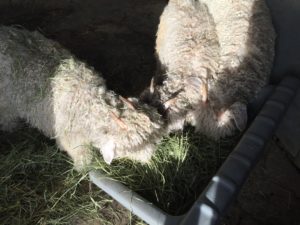 Like I said, when we first got these goats, we used what we had:  random horse stuff.  The previous owner of our property had had horses and left a ton of feed buckets, water buckets, and miscellaneous things that work great for larger animals.  We took one of these gray feed buckets that you bolt to a fence and set it on the ground in the stall.  We just would put one flake of grass hay in the bucket at a time.  We knew that if we put too much in, the goats would push a lot of it to the ground as they were digging around for a piece of hay.  Over time, we realized that we were wasting a lot of hay in the process.

One day, I stumbled across the concept of a hay feeder and decided to try to make my own.  Y’all I am so new to this whole homesteading life that I had NEVER heard of a hay feeder before getting goats!

I had some metal fencing lying around from protecting some bushes a while back.  With a few plastic zip ties, baling twine and a 5′ long section of this metal fencing, I was able to construct what you see below.  I also used some baling twine to tie the horse feeding bucket to the stall wall so that it couldn’t be pushed around a ton.  This caught a lot of the waste that fell from the feeder.  I could then restful it in the feeder, or the goats would sometimes eat from the bucket part as well. 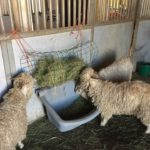 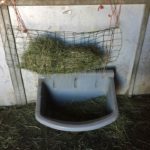 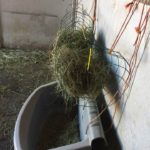 This worked well for a few months until the metal fence broke down and started getting sharp in some spots.  This was a good stepping stone to know that something like this works well.  At that point, I decided the cheap-o version at home was good, but not a permanent solution.  I turned to my dear friend Amazon and found this String Hay Feeder, which was less that $15 and can hold an entire small bale of hay.  While this can be a fair amount of work to get the hay into, it can last us quite a while and I can hang it from our stall wall easily.  Oh, and I’m still using the tied down feed bucket underneath to catch any scraps that fall still.  That simple setup has been amazing!

So, to all the newbies out there, know that there are tons of great ways to slow feed your goats grass hay during the colder months that don’t necessarily create a ton of waste or create a mess!

*Any links to products on this page are affiliate links.  If you buy something with our links, you help feed an angora goat!  Shop on!